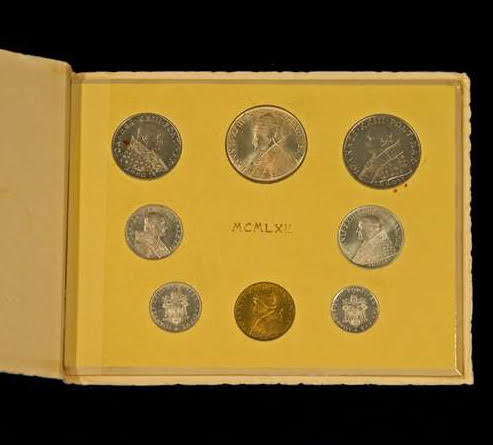 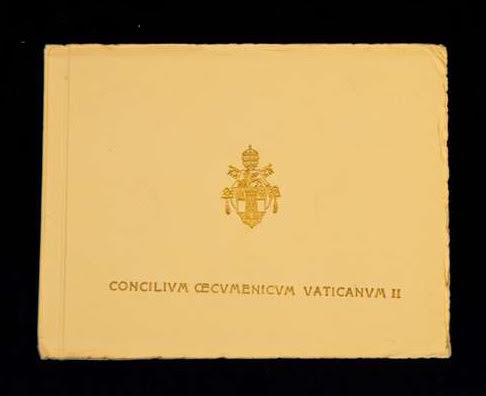 In 1929, thanks to the signing of the Lateran Treaty with Mussolini and Pius XI, it gave birth to the nation of Vatican City State. So now they’re able to produce their own stamps and coins. And what we have here is actually a full coin set, legal tender, called “lira”, which was the monetary system prior to the euro, and these lira are commemorative coins from 1962, celebrating the Second Vatican Council. They’re in their original sleeve.

It’s a real commemorative coin set, the type of which is very desirable to coin collectors. Even today the euros are very prevalent for coin collectors, and we will see them in another episode of this series.

Certainly the lira, minted during his pontificate, commemorating the most significant event of his pontificate, the Second Vatican Council, are a desirable item.
The historical component (the Council) is so significant and is the reason he’ll go down in history as one of the most influential and consequential and most loved popes: the Good Pope John.

And every year you can get different coin sets that are usually just basic coins, but because of the consequential aspect of the Second Vatican Council, they made coins for that, and that isn’t common. So that’s significant for coin collectors, but it gets to the point of how significant John XXIII really is.

And what’s really exciting for us, Father Ryan, is that we both will be at the canonizations. To see them named saints: John XXIII, because of his courage to step out and step forward with the Council, and because of his love, his pastoral abilities, his joy and faith and virtues—all these different things are so important.

Ecumenical Council, Vatican II is inscribed on them.