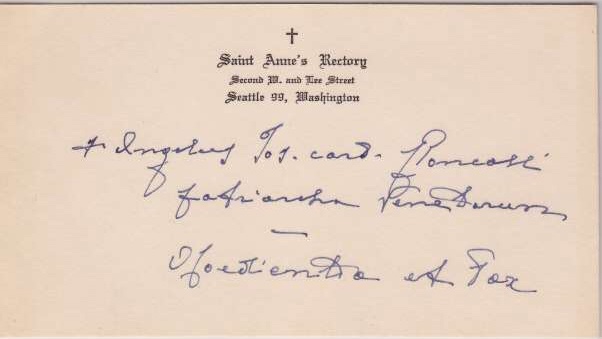 Even though some of my favorite items in the Collection are clothing items, as we’ve talked about, the things that started the Collection were autographs. I first started collecting autographs, manuscripts, and documents of popes, and so I’m still very fond of autographs in a particular way.

What I have here is an autograph of Cardinal Angelo Roncalli before he was elected pope, and it’s actually a calling card from a parish in Seattle, Washington. So we can imagine that a priest or seminarian back in 1956 or ’57 was writing to a whole bunch of different cardinals, using the calling card of the parish. He probably sent them out and they returned them, signed.

Low and behold! One of them gets elected pope, and so here is the calling card of the parish in Seattle, signed by now Saint John XXIII.

It’s from Saint Ann’s rectory. I’ve never looked it up, but maybe someone watching this show or reading this entry will be from this parish.

I think of him as a pastor, too. You know, I think of pastors living in a rectory. And he was such a pastoral man, a thing that he always reminded himself and priests of. You can be learned, you can have all the gifts of diplomacy, but if you’re not pastoral, the other things mean nothing, because we are pastors, “first called to lead others to Christ.” Above all else. And he modeled that. It was a great sign of his virtue, and it’s the reason he was canonized.

And we talk about him being a pastor at heart? And here he is, signing a card from a pastor’s residence. Such a simple, and beautiful gesture.

It is signed, Cardinal Roncalli, Patriarch of Venice.

Additional Information about this Artifact:

April 26, 1995: The Beginning of the Papal Artifacts’ Collection

This Collection began with the acquisition of  autographs of two cardinals, Giovanni Montini and the one featured here of  Angelo Roncalli.

On April 26, 1995, I received in the mail my first two papal autographs: those of Saint John XXIII as Cardinal Angelo Roncalli, and Blessed Paul VI as Cardinal Giovanni Montini.  I know this, because I’ve always recorded in my Bible the dates I receive a new pope’s autograph for my Collection.

I am often asked what I intend to do with this collection. It has always been and remains my intent to donate it to the Church where it may be enjoyed forever. At the present time I am seeking a location where it may be displayed rather than kept in archival conditions. However, because of the rarity and age of the artifacts, this would demand museum quality conditions where storage of the artifacts could be closely monitored. An ideal situation would be a Catholic college or university interested in showing this very valuable and historical collection.

I have always had a purpose in collecting these artifacts: to educate the faithful about the structure of the Catholic Church and, specifically, the popes. When we call the pope the “Vicar of Christ,” what we are saying is that he is the “voice of Christ” on earth; that is what “vicar” means.

It has always been my hope and desire that my passion for the popes will lead others to the same love for and interest in our Holy Fathers, from Peter to Francis.

It is my belief that you cannot love what and whom you do not know. May this Collection encourage you to learn more about our Church and about the men and women who have served her so faithfully.

Those of us who are privileged to be a part of his parish, and the Diocese of Duluth, Minnesota are well aware of the gift this priest has been, not only to his family and friends, parish and diocese, but also to those of you who are able to view the Collection he has amassed via his website, which was created because of his great love for the Catholic church, and particularly, for the papacy.