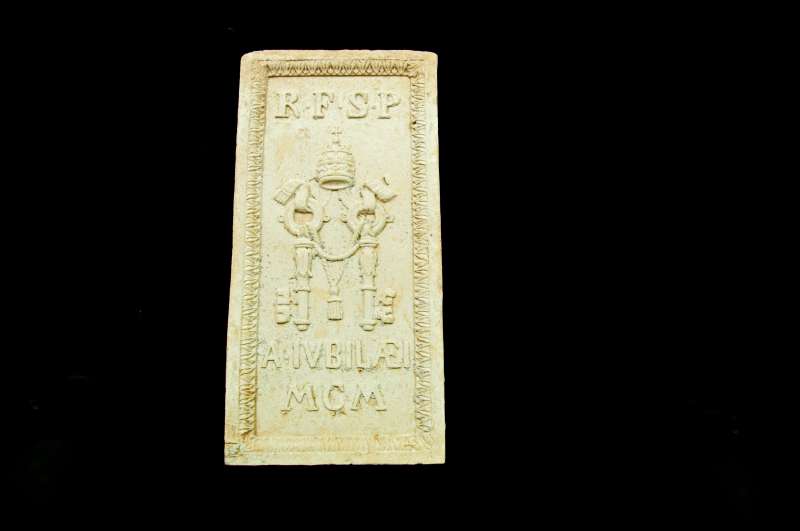 The following commentary is taken from the EWTN series, The Papacy: A Living History, The Papal Artifacts Collection of Father Richard Kunst (available on DVD directly from EWTN). This commentary is from Episode 4, Popes of the 19th & 18th Centuries.

This item is a Holy Year brick, one of many that was used to seal the door of St. Peter’s Basilica until the advent of the Holy Year when they were then removed.

Holy years are a special year of graces and remission of sins. They involve pilgrimages to sacred sites and certain indulgences that can be gained by visiting the various major basilicas in Rome.

Holy Years began in the year 1300 when Pope Boniface VIII called for the first holy year. It was actually meant to be modeled after the Old Testament practice, which had sabbatical years, as well as holy years every 49 years.

It started off as an every 100-year thing–that’s why it was 1300–but eventually it evolved to be every 25 years. And so, every 25 years there is a holy year and this particular brick was from 1900. It is something that is significant because of its presence in that door for the period of twenty-five years.

The Pope is the one that opens the door. Usually it happens on Christmas Eve, the year before. So it would have been 1899. The Pope, then, is the first one to walk through the door once the bricks are removed.

It used to be that when the Pope would take down the bricks, he would literally have a big hammer and would break them. He’d injure himself sometimes, as well as people would come clamoring to get some of these bricks to have a relic of the holy year door. Once people started to get injured, they regulated that practice.

Now, when they take out the bricks they do it in a very deliberate way before the Pope gets there. When the Pope taps on the door, it’s all ceremonial now, but he’s still the first person to enter.

So there are many holy year bricks in the Collection that you can see. Not only are they from St. Peter’s Basilica, but also from the three other major basilicas, because each of them in Rome has a holy door. They remain enclosed in bricks until the Holy Year, and they all have these very ornate bricks similar to this one.

We also had an extraordinary year in 1933. Pope Pius XI called it for the 1900th anniversary of the crucifixion of Jesus. And so extraordinary holy years happen from time to time but usually we think of the general holy years. So the next one should be in 2025, and there are bricks sealing those doors right now that some day hopefully might be in this Collection, or in somebody’s collection.

The following brick is from the holy door of St. Peter’s Basilica from the Holy Year of 1900.

This is the institution created specifically to manage the whole of the works necessary for the realization and artistic construction of St. Peter’s Basilica in the Vatican.