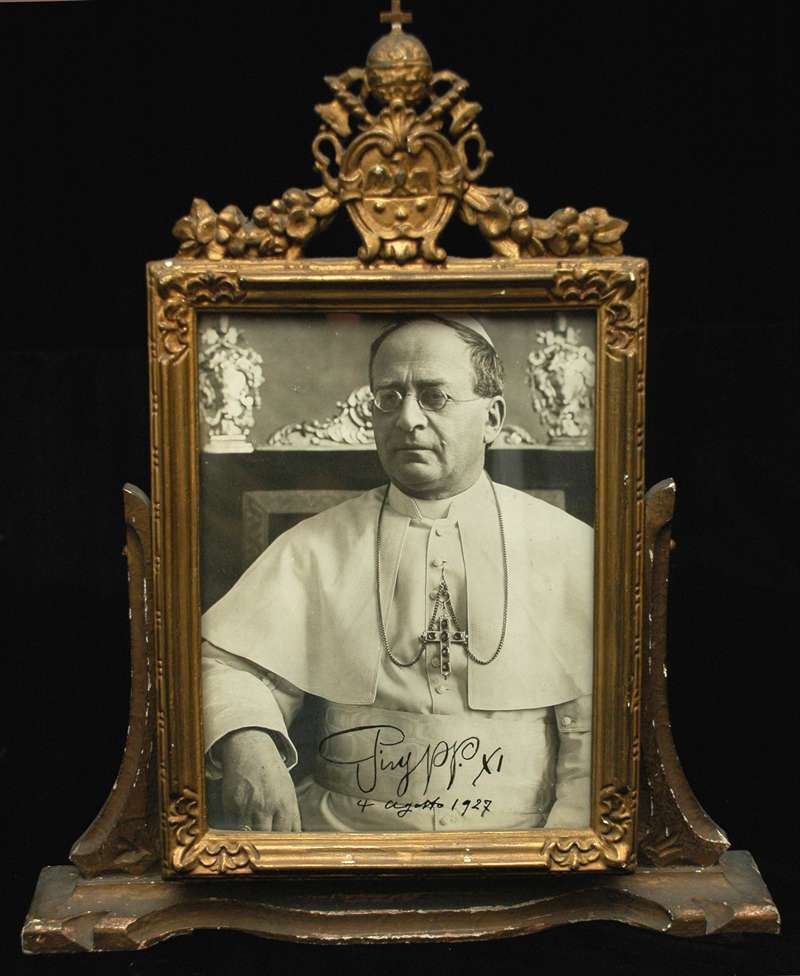 Father Richard Kunst, the curator of the Papal Artifacts’ Collection, has written an Apologetics column for his diocesan paper, The Northern Cross, since its inception in 2005. The following commentary was written by Father Kunst for the paper to highlight the importance of the Quas Primus encyclical, promulgated on December 11 of 1925, to introduce the new feast of Christ the King. It contains invaluable information from this Pope. We are featuring Father’s commentary to highlight its importance.

Reestablishing Christ’s Reign in Our Lives:

The month of November happens to contain one of my favorite feast days. Since 1925 the last Sunday of ordinary time has been dedicated to Christ the King. It’s one of my favorites because it was established by one of the most underrated popes in recent history, Pius XI (1922-1939).

Pius established the feast in his encyclical letter, “Quas Primas,” which was written to address a growing secularism in the first part of the 20th century. We would do well to read the writings of this pope, who reigned between the two world wars, to see how he was a prophet for the world at the beginning of the 21st century. In fact I would say as a certified “popeaholic” he is certainly in my top ten popes of all time.

In his encyclical, Pius wrote that Christ must be king over every aspect of life, from the person to the family, institutions and even the state. He wrote, “While nations insult the beloved name of our redeemer by suppressing all mention of Him in their conferences and parliaments, we must all the more loudly proclaim His kingly dignity.”

Re-read that quote again and remember that it was 1925; Pius XI would not know where to start today. You can’t say, “Merry Christmas” because it’s offensive; you cannot show the Ten Commandments because they are offensive; we cannot say “one nation under God” because it is offensive.’

Pius continues by explaining how things got so bad, how they grew so secular. “The state of things may perhaps be attributed to a certain slowness and timidity in good people, who are reluctant to engage in conflict, thus the enemies of the Church become bolder in their attacks.” In other words one of the reasons why the world got to the secular point it has is because those of us who profess to be faithful Christians are too fearful in standing our ground, lacking a certain Christian courage, as it were.

So does that mean if we could re-live history, nations, at least Western nations, would be more like theocracies? That governments in the West would look like some Middle Eastern countries, where religion and government are mixed? Not exactly.

It might surprise some readers to know that in this country, one of the earliest proponents for the separation of church and state was the Catholic Church! Early in our history, many of our public schools were becoming too much like Protestant schools. On various levels, it was Catholic leaders who were trying to prevent the immersion of church and state so as to protect the Catholic children from being proselytized in school.

The Catholic leaders during the childhood of our nation never intended to avoid all mention of religion in the public forum. Neither did the fathers of our nation. Washington, Madison, Monroe, Jefferson and most of the others would no doubt be shocked that Pius XI had to address problems of secularism prevalent in the nation they founded. The First Amendment to the Constitution’s religion clause states that “Congress shall make no law respecting an establishment of religion, or prohibiting the free exercise thereof.” This means religion-neutral, not void of all vestiges of religion.

In “The Heritage Guide to the Constitution,” one of the contributors, John Baker, wrote: “It (the First Amendment) prohibits Congress from legislating either to establish a national religion or to disestablish a state religion. As Lawrence Tribe has written, ‘[a] growing body of evidence suggests that the Framers principally intended the Establishment of Religion Clause to perform two functions: to protect state religious establishments from national displacement, and to prevent the national government from aiding some, but not all, religions’” (303).

When you think of the separation of church and state, is that what you think of? I doubt it.

Organizations like the ACLU try to paint distorted pictures as to what the framers of the Constitution envisioned. I am pretty confident that the brilliant, and might I say inspired, founders of our great nation never intended to have the Ten Commandments taken out of our courthouses, or to have “In God we Trust” taken off our coinage, or to have “one nation under God” be challenged in our Pledge of Allegiance so that school children could not proclaim it in our public schools.

Separation of church and state? Most certainly! Whitewashing every aspect of religion from the public forum? Absolutely not! The great Pope Pius XI had to address this growing problem in 1925 when establishing the feast of Christ the King. Had we all heeded his call over eighty years ago, I wonder if our country would be in the dire place it is now.