A Passport Issued in the Name of Pope Leo XII 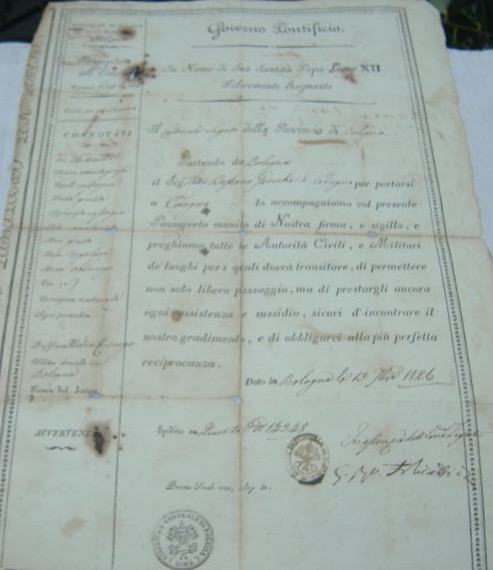 Leo XII: Passport Issued in the Name of the Pontiff 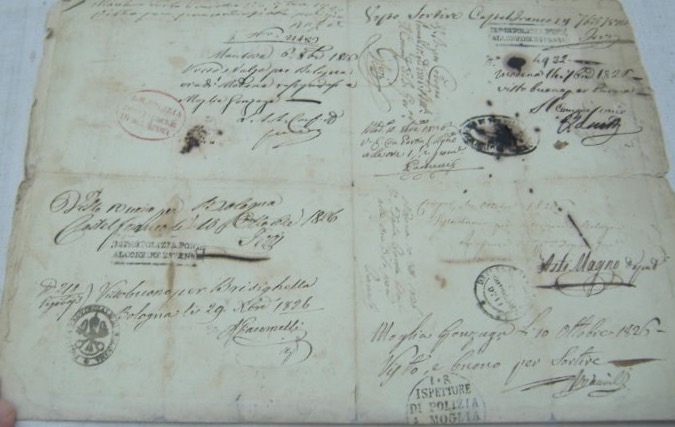 Leo XII: Passport Issued in the Name of the Pontiff, Close up

Passports are items that have ink stamps on them. Every country issues its own passports to indicate that somebody belongs to that particular country and is in good standing there and, therefore, able to travel to other countries as well. And the Papal States were no different. The Papal States as a nation, up until 1870, had their own passports, and this item is a passport from the time of Pope Leo XII with several different ink stamps on it.

Vatican City State still issues passports today. Everyone who is made Cardinal is issued a passport as a citizen of the one remaining Papal State to make it easier for him  to travel around Italy and Europe.  —Fr. Richard Kunst

A Passport Issued in the Name of Pope Leo XII

The pontifical passport was issued in the name of Pope Leo XII by the Cardinal legate of Bologna to a doctor, Mr. Bassano Greechi (this is the name on the passport) a native of Codogno who from  Bologna wants to return to Codogno.

Doctor Bassano Grecchi exercised the medical profession in Brisighella.  It is  also recorded  that he obtained one  for one of his voyages annotated on the back.   The back also contains  some stamps of other travels :   Gonzaga, the customs post at the border, etc.

The Governor of Bologna, who would have been know as the Cardinal-Legate,  issued this passport in the name of His Holiness, Leo XII.     The places in Italy mentioned are   Codogno. Codogno (Cudogn in the Lodi dialect) a town and comune of 15,462 inhabitants in the province of Lodi, Lombardy, Italy. It is the main center of the plain known as Basso Lodigiano, which has about 90,000 inhabitants,  and  Brisighella,  www.brisighella.org/en/

The large document is measures 32 X 46 cm.  The back of the document  contains some information relevant to the passport.

The passport is an example of the type of documents, which would have been issued in the Papal States  during the papacy of Pope Leo XII.

The Collection also has a similar passport from the papacy of Gregory XVI who followed Leo XII.  Here is a link to that on on Papal Artifacts:

Pope Gregory XVI: Passport Issued by the Papal States to the Nephew of Blessed Pius IX