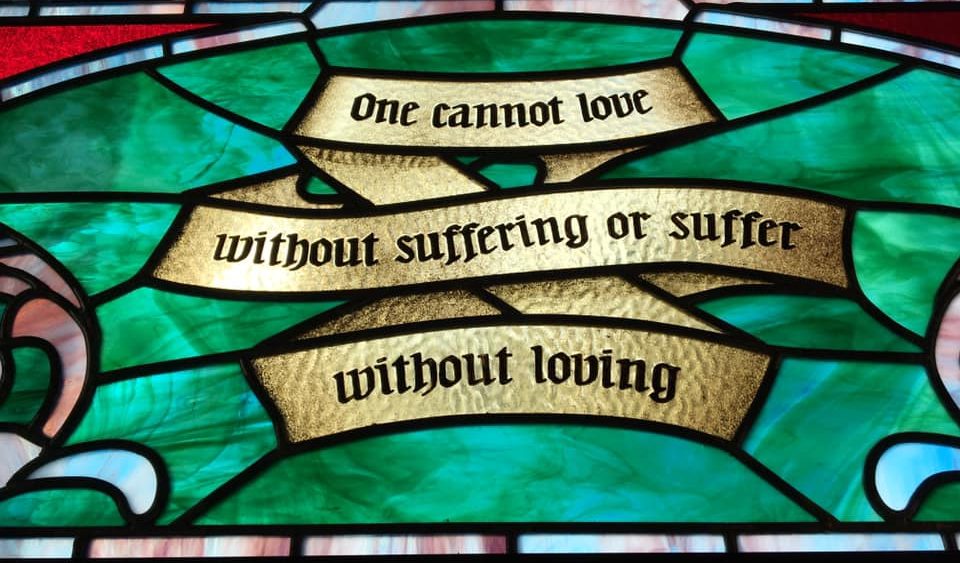 October 4, 1922: The Birth of St. Gianna Molla & The Curator of Papal Artifacts and His Parish

The Featured Image is the base of the newly erected stained-glass window of St. Gianna Molla in the Church of St. James, Duluth, Minnesota.

In particularly, on the altar,  3/4 of the saints featured are ones the pastor holds close to his heart.  He has had personal contact with two of them–and in the case of Pope St. John Paul the Great, seven encounters—and with the daughter of a third (Dr. Gianna Molla, daughter of the saint).

Congratulations, Father Kunst and your people.  On the anniversary of St. Gianna’s birth, we wanted to acknowledge this tremendous & successful undertaking. 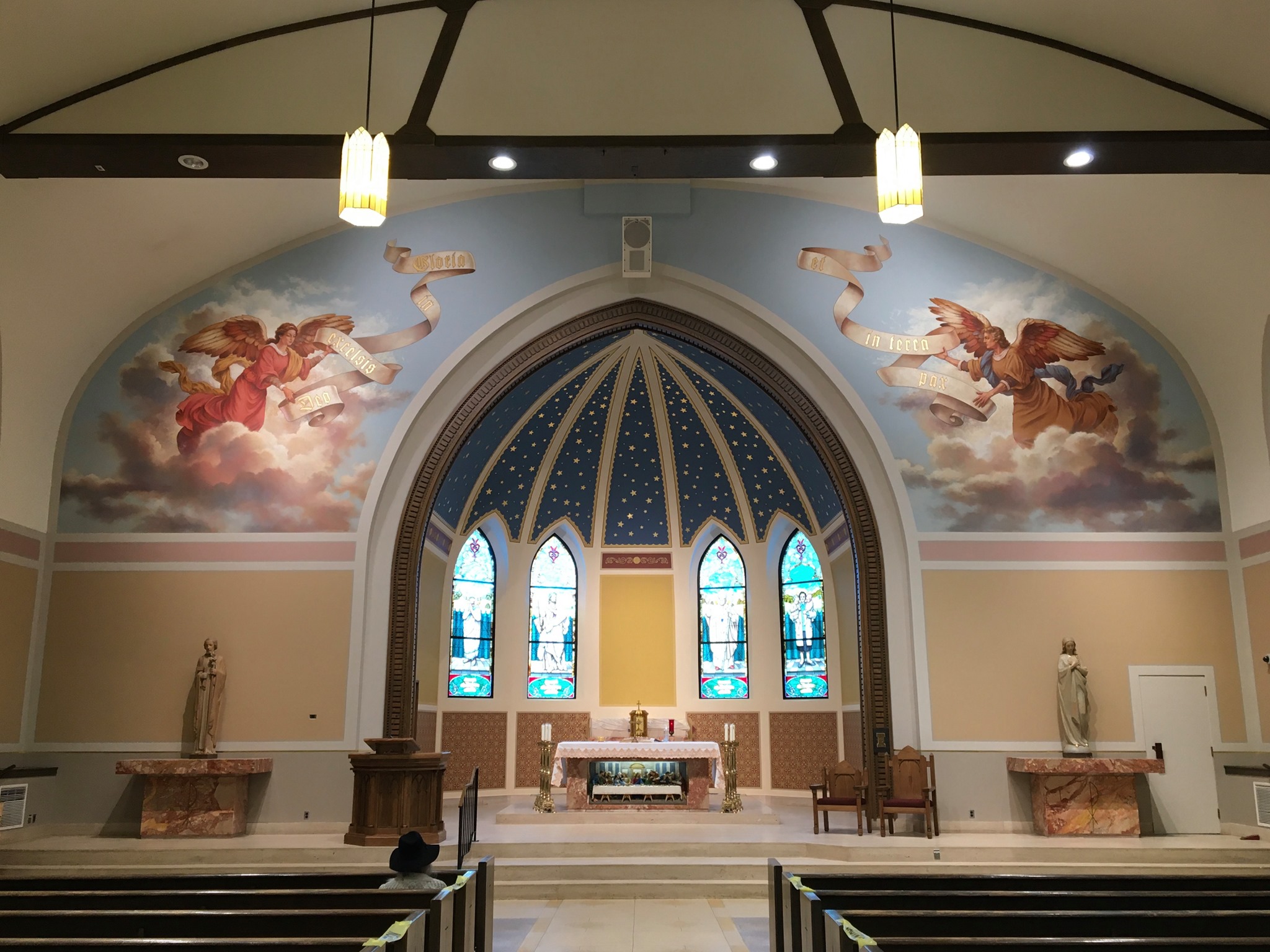 Father Richard Kunst, Curator, Writing to His Parishioners about the New Stained-Glass Windows on Their Altar
September 20, 2020

As I write this you can see our new windows in all their glory.   Truth be told this is the part of the (renovation) project I have been most anticipating, not only because we are restoring St. James as it was built with windows in the sanctuary, but also because at least three of the four windows are personal to me.  St. Gianna Molla’s is one of them. 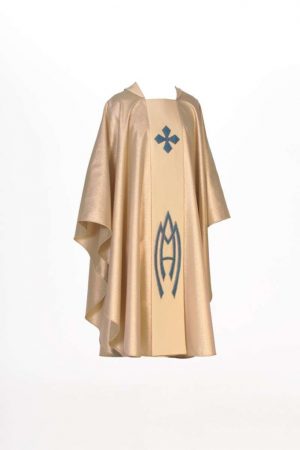 Pope John Paul the Great (third window), of course, is my favorite saint, but I purposefully had him portrayed the way you see the window, because the vestment he is wearing is what he wore for the closing Mass of World Youth Day in Denver 1993.  Our former bishop, Bp. Schnurr was the executive director of the 1993 World Youth Day, and as a gift of appreciation for his work, John Paul II gave him the vestment after the Mass.  Fast-forward to 2004, Bp. Schnurr gifted the vestment to me and my collection of papal memorabilia, so the vestment you see the pope wearing in the window, I now own. (There is a whole back story about my      getting this vestment which I may share at a later time). 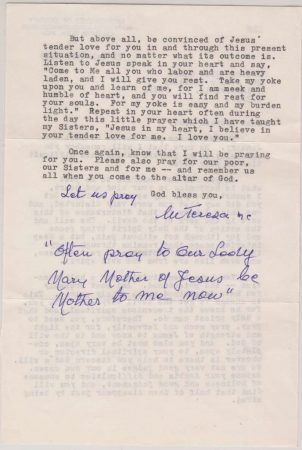 Mother Teresa of course is a beloved saint to all people of all faiths.  In 1995 I quit the seminary to seek a career in politics, so I wrote Mother Teresa asking for her prayers and guidance as I discerned my vocation in life.  Amazingly Mother Teresa took time out of her busy schedule to respond to me.  Her letter, typed with a manual typewriter on both sides of a half sheet of paper was very impactful on me, so I lifted one line from this personal letter and made that as the quote under her image.

St. Gianna was a young medical doctor in Italy when she was diagnosed with cancer, she was  advised by her doctors to abort her unborn baby so that she could have aggressive treatment to save her life.  She adamantly told her doctor, “No.”

She said the baby’s life was as important as hers, and that if one life was to be saved it was her unborn baby’s life.  St. Gianna died a week after giving birth to a daughter who shares her name.

Because of this St. Gianna Molla has become the patron saint of the pro-life movement, and the baby she gave her life for also grew up to be a medical doctor like her mother.  The younger Gianna Molla happens to be a friend of mine!  She has been to Duluth to visit me and speak at my last parish, and we keep regular contact with one another.  I have already sent her a picture of the window portraying her “saint mom” as she likes to call her.

Finally St. James the Less needed to be portrayed in our sanctuary because he is our patron. So as you are enjoying the windows, as I write this, I can’t wait to hear your response to them. 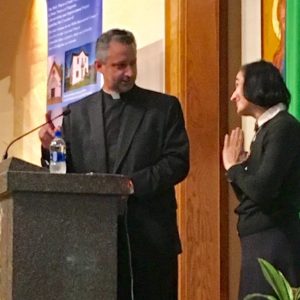 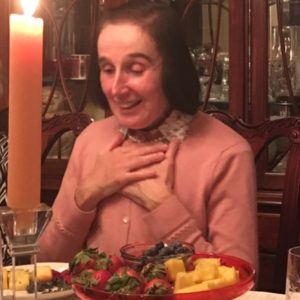 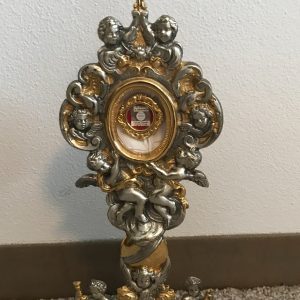 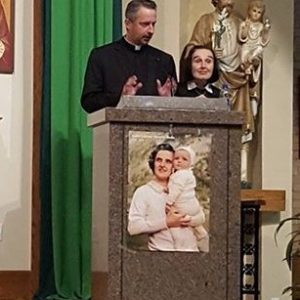 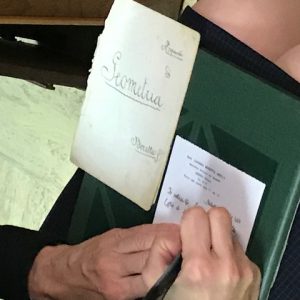 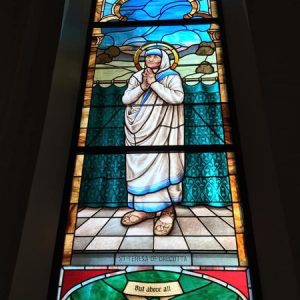 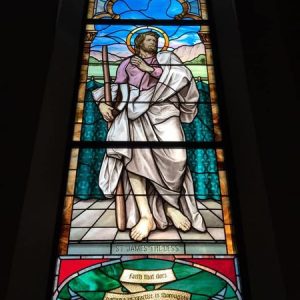 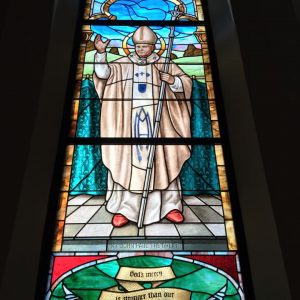 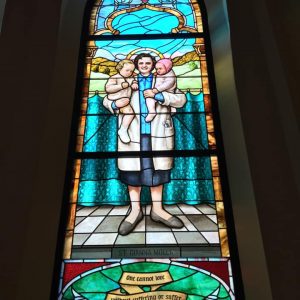 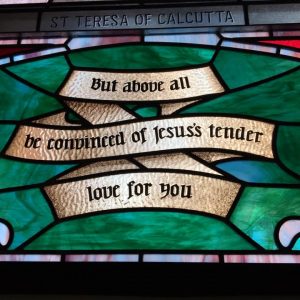 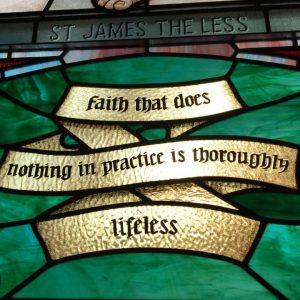 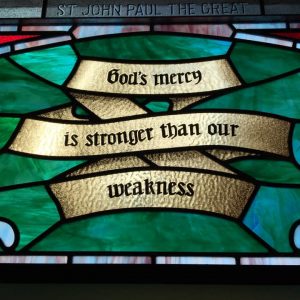 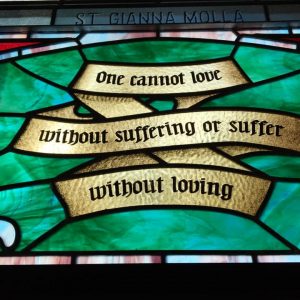