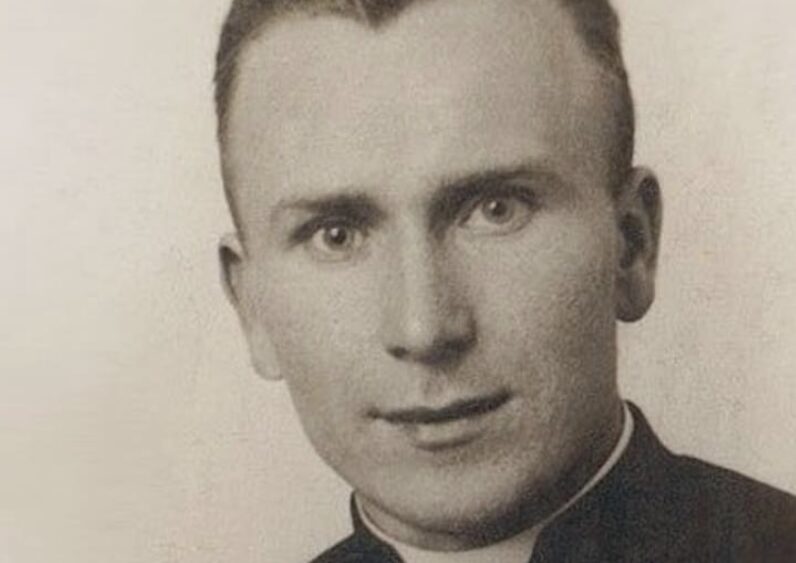 Jan Macha is a Polish priest who was murdered for helping the families of soldiers fighting against or imprisoned by the Nazis during World War II.

Pope Francis approved the cause of his beatification in 2019, but due to the pandemic the ceremony was delayed until this November 20.

As a priest he was a member of an underground group of thousands of volunteers called “Lily of the Valley,” which supported families persecuted by the Nazis.

FR. TOMASZ WOJTAL
Archdiocese of Katowice (Poland)
“He used to collect money which he then shared with these families. He also brought them food and products necessary for daily life. He would meet with them, he would comfort them”.

In 1941 he was arrested and tortured while in prison. He was then sentenced to death, and was beheaded in 1942. His body was never recovered.

FR. TOMASZ WOJTAL
Archdiocese of Katowice (Poland)
“He asked for a symbolic tomb to be built that would remember him in the future when people would go to the cemetery in his city and could pray an Our Father for him”.

Fr. Macha was only 28 years old when he was sentenced to death by guillotine. After saving thousands of people he will become the first Blessed from his region in southern Poland.

And from the Catholic News Agency: CNA

Fr. Jan Macha will be declared blessed at a Mass on Nov. 20 in the Cathedral of Christ the King, Katowice, southern Poland.

The Mass will be celebrated by Cardinal Marcello Semeraro, prefect of the Vatican Congregation for the Causes of Saints,

Macha, known as Hanik, was ordained a priest months before Nazi Germans invaded Poland in 1939. He offered aid to families who lost members in the fighting and was a member of an underground group codenamed “Konwalia” (Lily of the Valley).

The Gestapo, the secret police of Nazi Germany, arrested him on Sept. 5, 1941, at a train station in Katowice, Upper Silesia. After humiliating interrogations, he was sentenced to death on July 17, 1942.

He was 28 years old when he died and had served only 1,257 days as a priest. His body was never recovered.

Welcoming the beatification, Archbishop Wiktor Skworc of Katowice said: “The beatification is certainly a very important event for our local Church. I am happy that our Hanik will be proclaimed blessed. He has waited a long time for this, and so have we.”

“I hope that this event will turn into an opportunity to strengthen the faith and revitalize religious life in our archdiocese in this difficult time of recovery from the pandemic.”

Fr. Damian Bednarski, the postulator of Macha’s beatification cause, said: “The time of the pandemic has shown us that we must learn patience. We waited patiently for the decision regarding the date of the beatification.”

“Now, let us ask Providence that we may participate in the elevation of the martyr from Upper Silesia to the altars without any obstacles.”

“We need permanent points of reference and the clear testimonies of those who have given their lives out of love for Christ. This can help us renew our faith.”

The beatification was originally scheduled for Oct. 17, 2020, but was postponed due to the pandemi

Fr. Tomasz Wojtal, spokesman for the archdiocese of Katowice, said: “We wanted to wait until all the faithful wishing to take part in the ceremony could be present.”

Macha’s sainthood cause opened in 2013. After the diocesan stage was completed in 2015, the cause was sent to Rome. Pope Francis issued a decree recognizing him as a martyr on Nov. 29, 2019.

Macha was the subject of the 2011 documentary film “Without One Tree, a Forest Will Stay a Forest,” directed by Dagmara Drzazga.

The title comes from a line in a letter Macha wrote to his family shortly before his execution.

“This is my last letter. In four hours, the sentence will be carried out. So when you read this letter, I will no longer be among the living! Stay with God! Forgive me for everything,” he said.

“I am going before the Almighty Judge who will judge me now. I hope that He will accept me. My wish was to work for Him, but it was not given to me. Thank you for everything!”

He continued: “I die with a clear conscience. I have lived a short life, but I believe that I have achieved my goal. Don’t despair! Everything will be all right.”

“Without a one tree, the forest will stay a forest. Without one swallow, the spring will come and without one man, the world will not collapse.”