Blog
Papal Artifacts / Father Richard Kunst / May the Church Again Breathe with Both Lungs: A Commentary from the Curator
Jul 21

May the Church Again Breathe with Both Lungs: A Commentary from the Curator 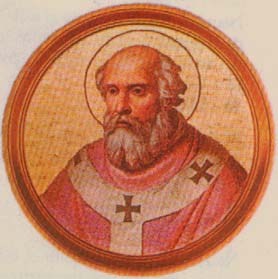 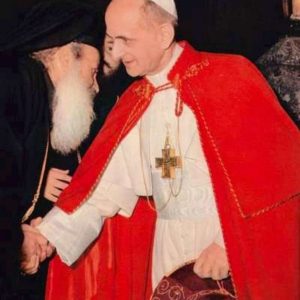 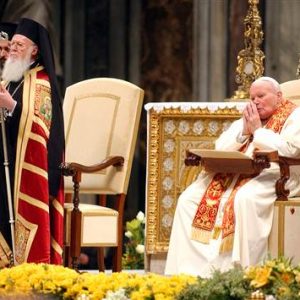 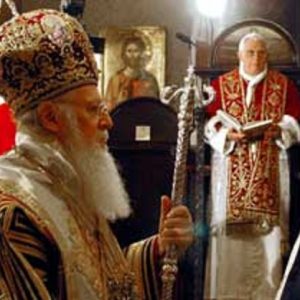 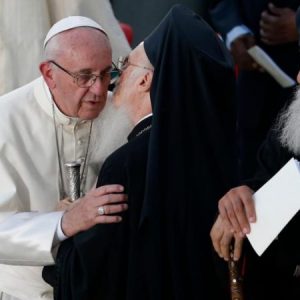 East-West Divide Beginning to Narrow
A Commentary from the Curator

Look up the word “Protestant” in the American Heritage Dictionary and this is the definition given: “A Christian belonging to a sect descending from those that broke away from the Roman Catholic Church in the 16th century.”

And that, of course, is what we normally think a Protestant is.  But I posit that this definition is incomplete.  There was a whole group of people that split from the Catholic Church long before the 16th century.  I am referring to the Eastern Orthodox.  We know a lot about the “Western Protestants,” but not so much about the “Eastern Protestants.”

When we look at the split of the East from the West, there are two primary components—a theological one and a historical one.

The theological reason has to do with the word “and.”  In the Nicene Creed that we pray every Sunday, we say, “We believe in the Holy Spirit, the Lord, the giver of life, who proceeds from the Father and the Son.”  This is referred to as the “filioque,” meaning “and the Son.”

In the early church, one of the greatest heresies was Arianism, which, among other things, denied Christ’s true divinity by stating that the Son was not co-eternal with the Father.  One of the ways the church responded to this at the Council of Toledo in 589 was to add “and the Son” (the filioque) to the Creed.  Eastern monks, on hearing of this addition to the Creed, protested, stating that this addition was defying orders of the Council of Ephesus (431), since the Council Fathers made clear that nothing was to be added to the creed that had been approved at the Council of Constantinople in 381.  Even though the “filioque” was not added until 589, the concept of the Holy Spirit proceeding from both the Father and the Son was in the writings and beliefs of the earlier Church Fathers.

It might seem like this is a theological splitting of hairs.  But the bigger causes of the split were the historical, political reasons.  In the year 330, the Emperor Constantine switched the capital of the Roman Empire from Rome to Constantinople, modern day Istanbul, Turkey.  Because of this, the city of Rome slowly began to decline in every way, while Constantinople flourished.

The split was consummated in 1203 when a Western crusade (unbeknownst to the pope) went, instead of Jerusalem, where they were supposed to go, to conquer Constantinople instead.  Christians killing Christians in a crusade was not a good ecumenical move.

The split remains to this day, but things have certainly warmed up between the East and West.  Most importantly, in 1965, Pope Paul VI and Ecumenical Patriarch Athenagoras I mutually lifted the excommunication from nearly a millennium before.  Paul VI also gave an important relic back to the patriarch: the skull of the Apostle Andrew, since the Eastern Orthodox look to Andrew much in the same way as we look to the Apostle Peter.

Pope John Paul the Great was also earnest in his desire and attempts to bring the East and West back together again. He often referred to the church as breathing with only one lung, the Eastern Orthodox being the other lung.  John Paul even wrote an encyclical on the relationship of the East and West, in 1995, called “Ut Unum Sint” (That They May Be One”).

The Eastern Orthodox do have the true presence of Christ in their Eucharist, though we are not to receive Communion from them because we are still not in union with them.

The ecumenical work between the East and West is still very much alive.  That was made clear when Pope Benedict XVI  went to Turkey to visit with the ecumenical patriarch.  It is certainly appropriate that we keep this in prayer, so that the church will once again be able to breathe with both lungs.  Father Richard Kunst, Curator

Note: The following information is included with the commentary (above), which was written prior to the 2017 meeting referred to below:

ROME – Pope Francis, in a message to Ecumenical Patriarch Bartholomew of Constantinople, urged Catholics and Orthodox to continue the path of dialogue on key theological issues to achieve full communion between the two churches.

Theological discussions on primacy – the authority of the lead bishop – and synodality, or the deliberation of the College of Bishops in the West and the synod of bishops in the Eastern churches, can enable Orthodox and Catholics “to evaluate, even critically, some theological categories and practices which evolved during the second millennium,” the pope said in a written message delivered Nov. 30 to the patriarch in Istanbul.

The pope’s message was carried to Bartholomew by Cardinal Kurt Koch, president of the Pontifical Council for Promoting Christian Unity, who led a Vatican delegation to Istanbul for the feast of St. Andrew the Apostle, the patriarchate’s patron saint.

In his message, Francis sent greetings to all those attending the liturgical celebration in Istanbul and asked for prayers while he continues his Nov. 27-Dec. 2 visit to Myanmar and Bangladesh.

“When the deacon invites those gathered during the Divine Liturgy to pray ‘for those who travel by land, sea and air,’ I ask you, please, to pray for me, also,” the pope said.

Like the apostles, who proclaimed the death and resurrection of Jesus “through their words and the sacrifice of their lives,” the pope said Catholics and Orthodox are called to make this proclamation “our own,” which will enable both churches to “enter into communion with the Father, through the Son, in the Holy Spirit.”

Recalling Patriarch Athenagoras’s words during his first meeting with Blessed Paul VI in 1967, Francis said Catholics and Orthodox must “join together what was divided, wherever this is possible, by deeds in which both churches are involved, giving added strength to matters of faith and canonical discipline which we have in common.”

Francis also praised Bartholomew’s efforts in promoting the care of creation, the peaceful coexistence among peoples and the plight of Christians in the Middle East.

The patriarch’s commitment, he said, “is a source of inspiration, support and encouragement for me personally for, as you well know, we share the same concerns.