What have I done with my baptism and confirmation?  Is Christ really at the center of my life?  Do I have time for prayer in my life?  Do I live my life as a vocation and mission?  —Pope St. John Paul II

In celebration & in gratitude today, we honor the 102nd anniversary of the birth of this beloved pope, St. John Paul II. The story of the chasuble, featured here, is told below.

We invite you to access Papal Artifacts/John Paul II where you will find information, artifacts, you-tubes, and photos associated with him, including a first class relic, his own blood. 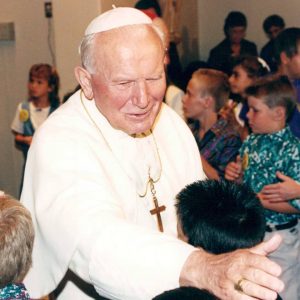 Both of these priests were present at the beatification and canonization. Father Kunst said he always had it in his mind that the last time he would wear the chasuble would be in the event of John Paul’s beatification. 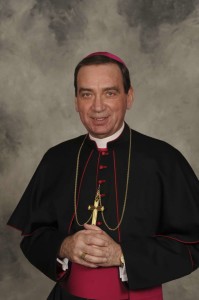 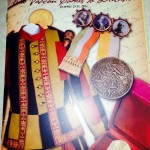 We have found one of the most comforting memories of Saint John Paul II is hearing the sound of his voice.  We’ve included two you tubes from WYD Denver 1993.  The first one (at about the 2:15 minute mark) clearly shows him wearing this liturgical vestment, which is now a part of this Papal Aritfacts’ Collection, and, surely, one of its most treasured objects.

Please take the time to be a witness to this historical event where over 500,000 young people gathered.

Papal Artifacts honors his memory even as we celebrate here his birth and the gift of his life to us.