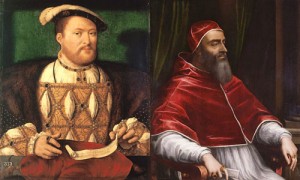 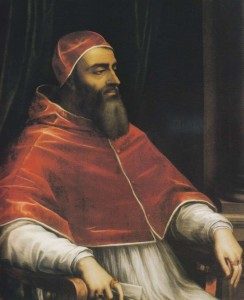 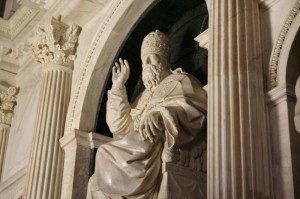 The artifact featured here is a document signed prior to Pope Clement VII’s  pontificate as Cardinal de’Medici. It is dated 1520 and is an untranslated letter.

On January 5, 1531, Pope Clement VII sent a letter to King Henry VIII of England forbidding him to remarry under penalty of excommunication. Henry, who was looking for a way out of his marriage to his first wife, Catherine of Aragon, ignored the pope’s warning. He went on to marry Anne Boleyn (and five subsequent wives), leading to his excommunication and one of the most significant schisms in the history of Christianity.

Catherine was the daughter of Ferdinand and Isabella of Spain and the aunt of Holy Roman Emperor Charles V, in addition to being the widow of Henry’s brother, Arthur. Increasingly concerned by his failure to produce a legitimate heir—although he publicly acknowledged an illegitimate son, Henry Fitzroy—Henry searched for a way to end his marriage in a manner consistent with his Catholic faith. This was necessary for political reasons, as a monarch violating Catholic doctrine risked disgrace and condemnation by the pope. Henry was also by all accounts a fairly devout Catholic. He was a known opponent of the Protestant Reformation that was taking shape on the continent, earning the title of Defender of the Faith from Pope Leo X for a treatise he wrote attacking Martin Luther.

Henry sent emissaries to the pope in hopes of having his marriage annulled, and even prevailed upon Clement to establish an ecclesiastical court in England to rule on the matter. Clement, however, had no intention of nullifying the marriage. In addition to his doctrinal objections, he was more or less a prisoner of Charles V at the time, and he was powerless to stand in the way of Charles’ insistence that the marriage stand. Already infatuated with Anne Boleyn, who was known to have taken a keen interest in Luther and the Reformation, Henry had exhausted his options for remarrying within the church and decided excommunication was a fair price to pay for independence from the pope and the potential of fathering an heir.

Henry banished Catherine from his court and married Anne (secretly in 1532, and publicly the following year). In doing so, he fundamentally altered the course of Christian and European history. Subsequent to his remarriage, Henry issued a string of decrees that removed his kingdom from papal rule, ending the supremacy of the Catholic Church and creating the Church of England. Although the new church was, at first, extremely similar to Roman Catholicism, these moves made Henry and his successors absolute rulers who did not answer to the pope. England joined a number of German states, as well as Sweden, in rejecting Catholicism, drawing battle lines for centuries of religious, political and military conflict to follow.