How a Pope Is Elected 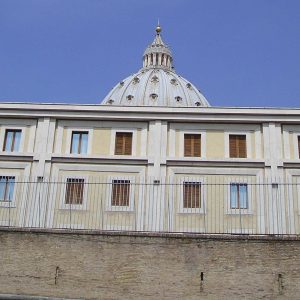 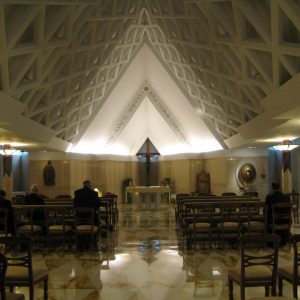 The  cardinals participating in the Vatican’s papal conclave spend their days locked in the Sistine Chapel casting vote after vote until one of them is elected Pope.

But where do they go in the evenings?

For the duration of the enclave, the cardinals stay at the Domus Marthae Sanctae, a hotel-like residence in the Vatican with 131 bedrooms, a dining room and sitting rooms, according to The Catholic Register .

The five-story building normally houses clerical and lay guests; most of the rooms have a sitting room and separate bedroom with a private bathroom, according to The Catholic Register.

The Pope is elected during the Conclave, the spiritual retreat during which cardinals meet to elect the new pontiff.

They stay in the Domus Sanctae Marthae on the far left of the complex of which St. Peter’s is the central structure. The actual conclave takes place in the Sistine Chapel which takes its name from Sixtus IV (Francesco della Rovere) (1471-1484) who commissioned it.

Only cardinals not yet 80 years of age can elect the new pope, and the number cannot exceed 120. Those over 80 have a spiritual role and only participate in the preliminary stages of the election.

For centuries only cardinals have been elected, but any baptized and unmarried Catholic man can be elected as long as he has no ecclesiastical or divine law preventing him. If he weren’t a bishop at that point, the law would state he would be ordained after his assent.

In front of the altar is a table where the scrutineers sit. The pope is selected by secret ballot by the cardinal bishops. The names of nine voting cardinals are then chosen at random: three to serve as scrutineers, three to collect the votes of the cardinals that remain seated and three revisers; these names are drawn by the last cardinal deacon in full view of those present. The cardinal deacon extracts the names of 9 who will carry out these tasks.

A new pontiff is elected when he receives 2/3 of the votes of those present. From the 34th ballot, the conclave proceeds to vote for the two cardinals who received the most votes in the last ballot. They, then, can no longer vote during the balloting.

Pope Gregory XV introduced the secret ballot in 1621: this ensured not only that social relationships did not influence how the cardinals voted but also that they voted according to conscience. The form of oath taken by the cardinals must be that of the secundum deum which is the same as that taken prior to voting. The Cardinal Dean presides over the College of Cardinals. One of his privileges is to ask the person elected pope if he intends to accept or not (and to ordain the new pontiff a bishop if he isn’t one). Secundum Deum is a Latin term meaning according to God.

Once a cardinal obtains 2/3 of the vote, the Cardinal Dean addresses him and asks if he’ll accept the nomination. If affirmative, he then asks him what papal name he has chosen.

After each round of votes the ballots are tied with a string and burnt in a stove installed for the occasion. Black is the sign that the vote is inconclusive; white signals the election of a new pope. (There’s a special substance added to produce white smoke.)

Once elected, the new pontiff is accompanied to the Room of Tears, where he is dressed in papal vestments for the first time. The vestments include a white zuchetto, red cape, red stole, white rochet and white cassock. Once dressed the cardinals pay homage to him.

The Cardinal Protodeacon goes to the main balcony of St. Peter’s Basilica in the Vatican and before the crowd declares the ritual phase, Annuntio vobis guadium magnum. Habemus Papam, announcing the first name and surname of the elected cardinal, followed by his papal name. A Cardinal Protodeacon is the senior cardinal of the Order of Deacons, i.e. the longest serving cardinal deacon. It is he who announced the successful election reciting the famous phrase. He also bestows the pallium on the new pope during the Mass celebrating his appointment. The pallium is a white woolen band with pendants in front and back worn over the chasuble by a pope or archbishop as a symbol of full Episcopal authority.

The new pope walks in procession to the same balcony and after a brief speech give his first blessing, the urbi et orbi blessing, which is a Latin phrase meaning for the city and for the world.

I announce to you a great joy:
We have a Pope!
The most eminent and most reverend Lord,
Lord [First Name] Cardinal of the Holy Roman Church [Last Name],
Who takes for himself the name of [Papal Name].