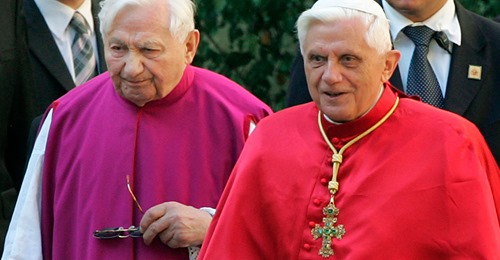 From Crux: Benedict XVI Remembers Brother as ‘Man of God’

ROME – In a letter read aloud at his brother’s funeral in Regensburg, retired pope Benedict XVI recalled several characteristics which he felt best described his eldest sibling, including a love of music, joy in adversity and a deep piety.

“He was a man of God. Even if he did not show his piety, it was the real center of his life,” Benedict said in the letter, praising his brother’s “sobriety and honesty.”

Monsignor Georg Ratzinger, a musician and the last living member of Benedict’s immediate family, died July 1 at the age of 96.

His funeral was held July 8 in Regensburg, and presided over by the local bishop, Rudolf Voderholzer, who told attendees that Benedict was watching the service via livestream. Prior to his brother’s death, Benedict had made a surprise visit to Regensburg June 18-22 to be at his brother’s side for the last time.

In his letter, read aloud by his personal secretary Archbishop Georg Ganswein, Benedict thanked Voderholzer for celebrating the funeral Mass, and he also voiced gratitude to all those who were with his brother in his final weeks.

Benedict noted that he has received numerous letters and correspondence from people all over the world expressing their condolences. Lamenting that he is unable to respond to all of them, he said, “Every individual should have a personal answer. Unfortunately, I lack the time and strength to do this, and I can only thank everyone for taking part in these hours and days.”

He said that his brother had not asked him to visit in June, but that he had felt that “it was the hour to go to him again.”

“I am deeply grateful for this inner sign that the Lord has given me,” he said, noting that when he said goodbye to Ratzinger the morning of Monday, June 22, “we knew it would be a farewell to this world forever. But we also knew that the benevolent God who gave us this togetherness in this world will also rule in the other world and will give us a new togetherness there.”

“Thank God, dear Georg, for everything you have done, suffered and given to me!” Benedict said.

Benedict then turned to his brother’s affinity for music, noting that for years it has been said “that my brother received and understood the priesthood call as a musical call.”

When Ratzinger was appointed musical director of St. Peters Cathedral in Regensburg in 1964, giving him the opportunity to conduct the famed cathedral choir, the Regensburger Domspatzen – dating back to the 10th century – he saw “saw the direction of his life indicated,” Benedict said.

However, over time, “this service became more and more a joy for him.” There was “hostility and rejection” at the beginning, Benedict said, but insisted that despite his suffering, his brother became “a father for the young people who gratefully stood and stand by him as his Cathedral Sparrows.”

Ratzinger came under fire several years ago after an investigation into child abuse in Germany, when it was revealed that he had used corporal punishment to discipline the choirboys. In 2010, Ratzinger issued an apology, but insisted that that had been the common practice at the time.

In his letter, Benedict voiced thanks to all those present at his funeral, a moment in which he said he was able to “experience anew how he, as a priest and a musician, was a priestly person and has always become new.”

Benedict also praised his brother’s cheerful and social nature, saying he had a good sense of humor and took joy in “the good gifts of creation.” At the same time, he said his brother was also “a man of direct expression in that he expressed his conviction openly.”

Noting that Ratzinger was blind for nearly 20 years, and was “therefore excluded from a good part of reality,” Benedict said the experience had been difficult, but that is brother “always accepted and went through it from within.”

Benedict closed his letter asking that God “reimburse” Voderholzer “for the very extraordinary effort you made in these weeks, which were not easy for both of us.” 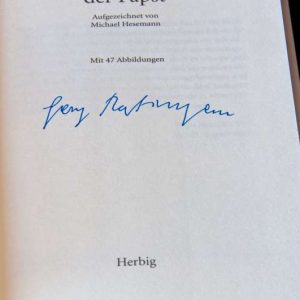