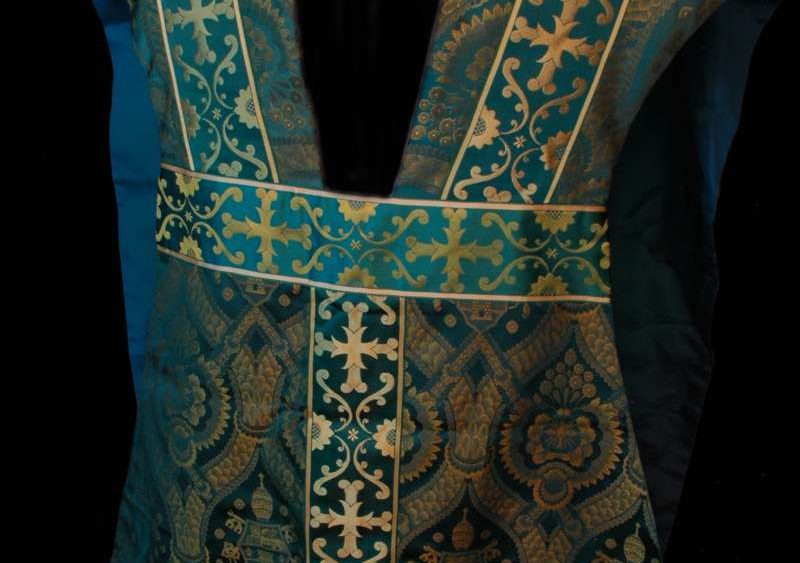 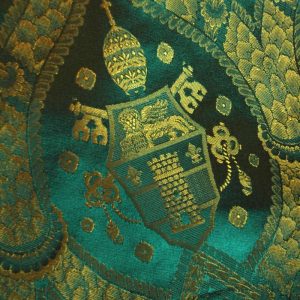 It is truly a priceless spiritual treasure to have two chasubles in this Collection from the pontificates of  the two most recent pope saints: John XXIII & John Paul II.

The featured image is a Fiddleback (style) chasuble with Maniples.  Here is the Curator’s information about it:

Just as we see his cardinal coat of arms in the thank you card from his elevation to the cardinalate, now we see the papal coat of arms of John XXIII embedded in the chasuble.

This chasuble brings us right back to the great celebration of the Eucharist. We always come back to that with these items, and certainly the priests celebrating in Rome during his time as our Holy Father reminds me of how privileged I have been to have been able to do that. And so many priests prior to us have celebrated Mass in that Basilica. It’s just a great component of our spiritual wealth and the richness of our tradition and our unity in the Eucharist.

Pope John Paul II inspired so many in my generation to the priesthood, through his life as a priest and as our Holy Father.  And to think I am only one of four people to have worn it: the Holy Father,  Archbishop Schnurr, a seminarian for his first Mass and myself.

The Catholic Digest right after the Pope died listed the top 10 events of the pontificate of John Paul II. And they listed World Youth Day in the top 10. So that’s pretty significant  –.Father Richard Kunst

Father Kunst was  present both at the beatification and also the canonizations of the two Popes.