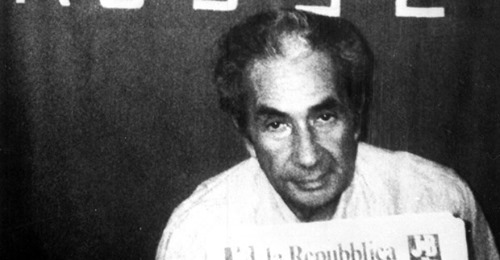 ROME – It’s commonplace in America to say everyone who was alive at the time recalls where they were on Nov. 23, 1963, when they heard JFK had been assassinated. The Italian equivalent, which came 15 years later, is remembering where you were on May 9, 1978, when you heard that former Prime Minister Aldo Moro was found dead.

Fifty-five days earlier, Moro had been kidnapped by the Brigate Rosse, “Red Brigades,” Italy’s homegrown far-left terrorist gang that helped produce what people here remember as the anni di piombo, or “years of lead,” in the 1970s and early 80s. In the attack in which Moro was grabbed, the terrorists also killed all five security agents who had been guarding the former Prime Minister.

When news of the kidnapping broke around 10:00 a.m. on the morning of March 16, 1978, Italy came screeching to a halt: Stores closed, schools sent students home and all network programming was canceled in favor of round-the-clock coverage. A few hours later the Red Brigades confirmed it was them, demanding the release of some of their own members and other terrorists being held in Italian jails or he’d be killed.

In a longer communique a few days later, the terrorists said they’d targeted Moro because for his entire career, he’d been a leader in the Christian Democrats, the centrist and pro-Western party which, since 1948, had successfully kept Italy from drifting into the Soviet sphere. Among other sins, the Red Brigades blamed the DC for selling Italy out to multinational corporations, free-market capitalism, oligarchic control of labor and the poor by the rich, and, inevitably, the United States.

Moro’s great legacy was the compromesso storico, or “historic compromise,” which began a process of reconciliation between the Italian communist party and the country’s mainstream parties and political institutions.

Though it’s not the foundation of his beatification cause, there’s a heart-breaking papal footnote to Moro’s kidnapping. He was a lifelong friend of Giovanni Battista Montini, the up-and-coming Italian cleric who was elected as Pope Paul VI in 1963, and during those agonizing 55 days, the aging pontiff tried to move heaven and earth to secure his friend’s release.

In a rare departure from what was then still the customary royal plural of the papacy, Paul VI addressed a first-person appeal to the terrorists on April 23. In a note in the pope’s own handwriting published by Osservatore Romano, the Vatican newspaper, the pope wrote:

According to Italian journalist Giovanni Bianconi, Vatican officials at Pope Paul’s urging had privately utilized prison chaplains to contact the leadership of the Red Brigades, offering to collect money to pay a ransom.

Former Italian Prime Minister Giulio Andreotti later confirmed that Paul VI had offered to pay a large ransom. According to one report, the amount floated was U.S. $10 million. Other reports suggest that Paul VI even considered offering to take Moro’s place as a hostage.

In the end, none of it mattered. On May 9, 1978, Moro’s body was found in the trunk of a Renault in the center of Rome, after having been riddled with at least 15 shots fired by two members of the Red Brigades.

The next day, May 10, 1978, Paul VI was scheduled to meet with a group of young Italian children who had just received their first Communion. Unable to hold back tears, Paul VI openly wept.

“He was a good and wise man … a person of great value, an exemplary father and, what counts even more, a man of high religious, social and human feelings,” the pope said. “This crime has shocked every honest person in the world, the whole of society.”

Many people close to Paul VI believe his never-resolved grief over Moro hastened his own death just three months later.

Of Moro’s deep Catholic convictions, there’s no doubt. He’d been a leader in Catholic Action and other Catholic youth groups earlier in his life, and throughout his political career he was a daily Mass-goer at St. Francis of Assisi parish in Rome’s Montemario neighborhood. In fact, on the morning Moro was kidnapped, Italy security officials had to track down his wife, Elornora Chiavarelli, at the parish, where had been teaching a class for mothers of children preparing for their first communion.

Today Moro is also remembered as a pioneer in another compromesso storico, this one inside Catholicism – the acceptance of a healthy distinction, though never a complete separation, between Church and state.

In 2012, a foundation in Milan dedicated to Moro’s memory announced a request to open a beatification cause. A couple of postulators, meaning the official in charge of preparing all the materials for the cause and seeing it through, were appointed, only to quit shortly afterwards. Both declared the job impossible without more help. No sainthood cause is easy, but imagine one that involves sifting through memories, records, writings, and news coverage of a man who was involved in every single political development of consequence in Italy for four decades – and the personal friend of a pope, to boot.

As a result, momentum towards beatifying Moro seemed to have stalled. The martyred leader’s daughter, Maria Fida Moro, wrote to the Vatican to complain, getting a letter back in response saying that no cause had ever been opened because the Vicarate of Rome had never asked for one. Not long after, Moro had an audience with Pope Francis, creating expectations that maybe things would get moving.

Two weeks ago, however, an Italian news report suggested that the cause is still stuck in place, and suggested the reason why is because the Vatican’s Congregation for Saints had requested financial contributions – really, a polite way of saying “bribes” – from its backers. The Vatican strongly denied the report.

Whatever the case, it seems clear that for now, a halo for Moro is not in the offing.

Yet hope springs eternal, and, so far, it’s been a good month for the Moro clan. Two days ago, the Italian Senate decided to recognize Maria Fida Moro and other members of the family as victims of terrorism, which, under Italian law, entitles them to a tax break on pension income and also slightly higher payments from the state pension fund.

(The problem had been that Maria Fida Moro doesn’t have a conventional pension but an honorarium from her time in the Italian parliament, and, semi-comically, the Italian tax office took the position that parliamentary service isn’t “work” and thus its form of a pension doesn’t qualify for the benefit.)

Having prevailed over Italy’s civil bureaucracy, perhaps the Moros can also kick its ecclesiastical system into gear. What’s needed now are the resources to hire a procurator and a team to prepare the basis for an eventual request to the Vicariate of Rome, which, in turn, would ask for the opening of a cause from the Vatican.

Such a project has a strong starting point, because it already has its own patron saint: St. Paul VI – who, one imagines, might be willing to have another talk with God, this one face-to-face, about his good friend. 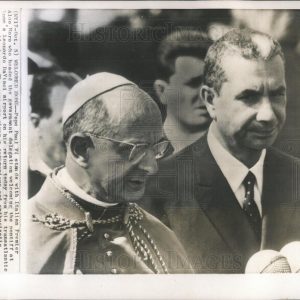