April 19, 2005: A Vota Scrutini Ballot from the Conclave that Elected Pope Benedict XVI & A Commentary by Father Richard Kunst 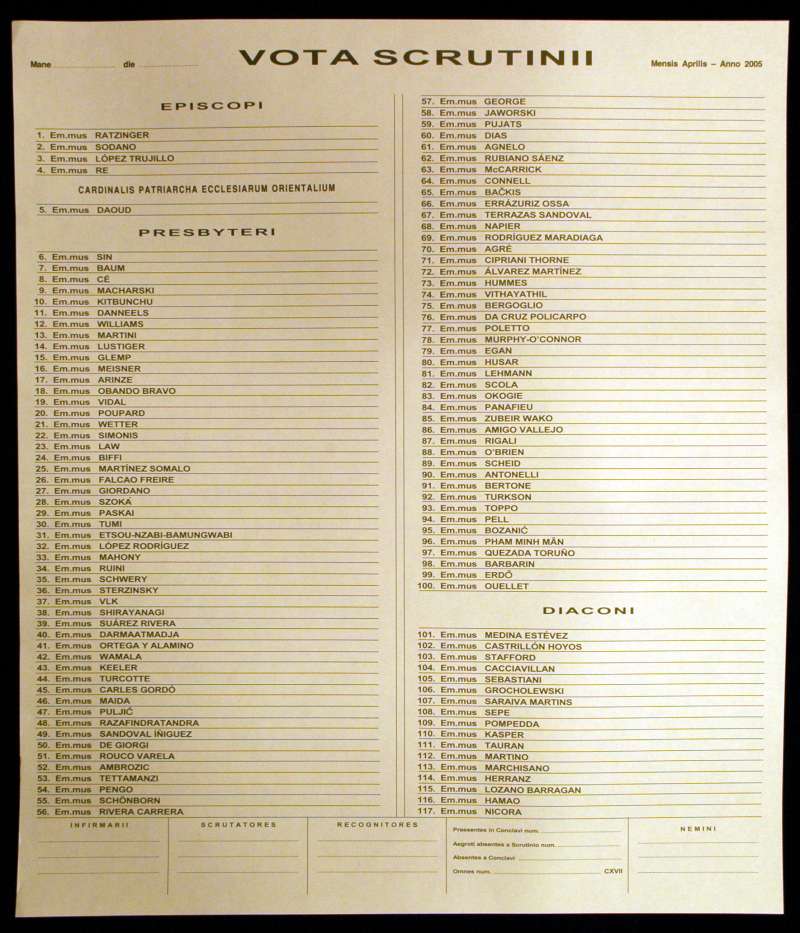 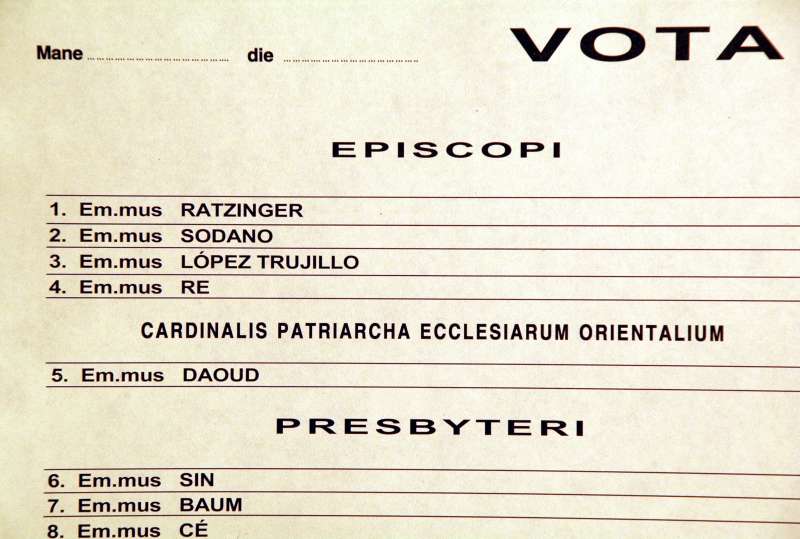 Closeup of Cardinal Ratzinger's Name on the Ballot

Not only is this a list of the cardinals from the 2005 conclave, it is also basically the tally sheet used while electing a new pope.

Here is a link to Papal Artifacts’ information about Pope Benedict XVI.  All items connected to him may be found there.

The following information is a conversation between Father Kunst and another diocesan priest, Father Ryan Moravitz who was a seminarian at the North American College during the Conclave electing Pope Benedict XVI.  His is a unique perspective.

This is a great item, one of a handful of items that really shouldn’t exist. It’s not a ballot as such but would have been used in the conclave that elected Pope Benedict XVI. What happens is that first, each of the cardinals vote, and after all the votes are put in the huge ciborium–because they all put their votes in it–then, each of the names is pulled out and is read three times, so that everybody knows nothing illegitimate is going on. And each of the cardinals has one of these sheets in front of him. And they can take a pencil and mark as a name is called off; they can mark it down, and in this way they follow along in the election. They are running a tally of each name addressed.

So as time goes on, they can say, “Okay, it looks like Ratzinger is getting more votes than anybody else.”

And so this is a Scrutinii that was not used, obviously, because everything used in the Conclave is burned. And that’s where we get the white and black smoke. And so the fact that this escaped destruction in one way or another is phenomenal. It’s not like these things float around too often after the Conclave. It’s a great item.

Father Moravitz  had the opportunity to be there for the election itself:   “When I see this item, I always recall my time at the North American College at the time of the election. The night before the cardinals went into Conclave, about 11 in the evening I went down into a chapel in the basement of the NAC, the Blessed Sacrament Chapel, to pray. And when I entered, five of the American cardinals were there praying. I was there alone with them late in the evening, and they were to go to the Vatican in the morning to enter the conclave.

I’ll never forget that evening. Sitting in the back of the small Blessed Sacrament Chapel, and praying for them, as they were getting ready to cast their votes, if you will–and more importantly, to listen to the Holy Spirit, to listen for whom the Spirit was calling to this unique role of shepherding the Church. It’s something I’ll never forget. And whenever I’ve seen this item, as I know your Collection quite well, I always think of that evening and the importance that our cardinals have in the Church. And that’s really their main role: to elect the Holy Father.

Father Kunst response: That’s right. It’s an honorary title basically. It actually comes from the derivative, ‘hinge’–that’s what the word cardinal comes from. It means that they’re ‘hinge representatives’, that they’re hinged to the Pope to bounce ideas off of, to be his consultors. But their main role as you already said is to elect. And so you can imagine, as I’m sure you were while praying for the cardinals at the NAC, what was going through those guys’ heads that night. As they were praying together–I mean, they probably said at dinnertime, “Well, we better pray together tonight.” I mean, I’m sure they took it very, very seriously. And you, Father Moravitz, were able to witness it. That’s an awesome experience to have had–this small but unique connection to a papal election. To have been with those guys. How awesome!

Another thing I remember you saying was that after Pope John Paul II died, they shut all the windows and shutters to his apartment. I remember you made a comment. “When I look and I see those shutters are closed to his bedroom, it feels like an empty tabernacle.” Like the tabernacle on Holy Thursday when the Eucharist is gone.

Father Moravitz responds: Those days were very unique because there was that sense of a void. You knew the importance of the Holy Father and that we need him in that unity that we share. And so to not have him, and because I was born in 1980, it was very unique because I’d never experienced an election. And so those days, waiting for the election of the Holy Father, were very exciting. And when the election did happen there was great celebration in Rome–days, I’ll never forget, very historic days.

Father Kunst: I have never been able to be in Rome for a conclave because we’ve had so few in our lifetimes. But I can understand that it was an event that you will never forget. It’s something that you’ll be able to preach about for your entire priesthood. By sharing that experience and bringing it home to people that are not yet even born yet: what an incredible thing for you.

Father Moravitz: It was so unique to have most of the American cardinals staying at the NAC up until the conclave started–at that point they joined the others locked inside the Vatican. But once they had elected Benedict XVI, the American cardinals came back to celebrate with us as seminarians and as Americans there. It was really a journey and an historical occasion. And, then, we really saw the Universal Church. Everyone in the world seemed to converge at Rome at that point.