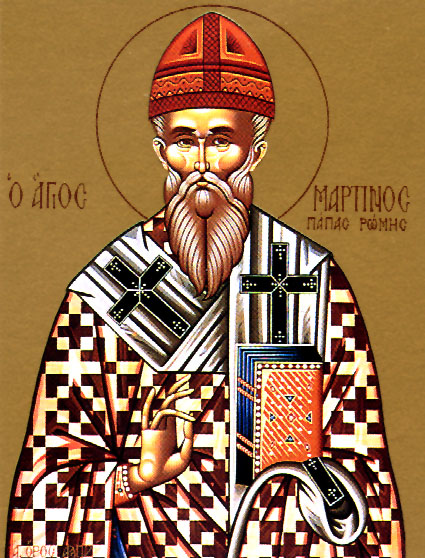 The Papal Artifacts’ Collection does not contain a relic of or item connected to Pope St. Martin, but honors him today on his memorial feast: the last martyred pope. 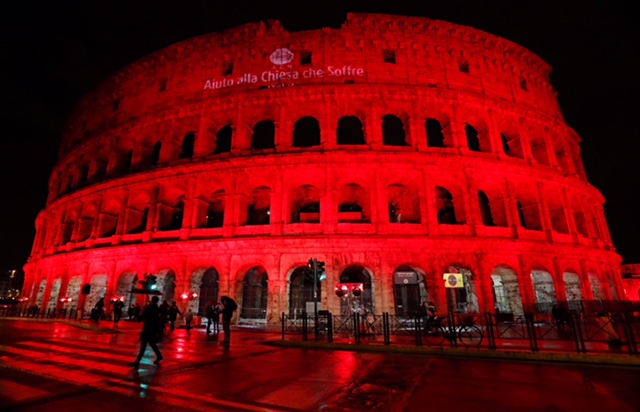 The Colosseum in Rome is lit in red to draw attention to the persecution of Christians around the world.

As for this wretched body of mine, God will look after it; he is near at hand, so why should I be anxious?  I hope that in his mercy he will not prolong my course.–St. Martin I

St. Martin, a native of Umbria, became pope in 649.  He presided over a council that condemned the doctrine of “Monothelitism.” the claim that in Christ there is only one divine will.  Martin, and the orthodox bishops believed this teaching departed from the teaching of the Council of Chalcedon (451), which affirmed the full co-presence of human and divine natures in Christ.

So divisive were these issues that the emperor had issued an edict banning any further discussion of the matter.  Enraged to learn that the council had ignored his edict, he dispatched troops to Rome to arrest the pope.  Martin was seized and transported in chains on a long voyage to Constantinople.  There, after three months of solitary confinement and suffering from dysentery, he was tried and convicted of treason against the emperor.  Deposed from office, he was flogged and received a sentence of death, subsequently commuted to exile in the Crimea.

In his place of exile, Martin experienced great physical hardship but suffered more from the sense of having been forgotten by the Church of Rome.  He felt truly alone.  He died in 655.  The Church that had quickly abandoned him was also quick to venerate him as a martyr, the last pope, so far, to have earned this crown.

—Blessed Among Us, by Robert Ellsberg

From a Letter by Saint Martin, Pope

Why am I anxious? The Lord is near.

By the power of the Holy Spirit, Casimir burned with a sincere and unpretentious love for almighty God that was almost unbelievable in its strength. So rich was his love and so abundantly did it fill his heart, that it flowed out from his inner spirit toward his fellow men. As a result nothing was more pleasant, nothing more desirable for him, than to share his belongings, and even to dedicate and give his entire self to Christ’s poor, to strangers, to the sick, to those in captivity and all who suffer. To widows, orphans and the afflicted, he was not only a guardian and patron but a father, son and brother. One would have to compose a long account to record here all his works of love and dedication for God and for mankind. Indeed, it is difficult to imagine or to express his passion for justice, his exercise of moderation, his gift of prudence, his fundamental spiritual courage and stability, especially in a most permissive age, when men tend to be headstrong and by their very natures inclined to sin.

Daily he urged his father to practice justice throughout his kingdom and in the governance of his people; and whenever anything in the country had been overlooked because of human weakness or simple neglect, he never failed to point it out quietly to the king.

He actively took up the cause of the needy and unfortunate and embraced it as his own; for this reason the people called him the patron of the poor. Though the son of a king and descendant of a noble line, he was never unapproachable in his conversation or dealings with anyone, no matter how humble or obscure.

He always preferred to be counted among the meek and poor of spirit, among those who are promised the kingdom of heaven, rather than among the famous and powerful men of this world. He had no ambition for the power that lies in human rank and he would never accept it from his father. He was afraid the barbs of wealth, which our Lord Jesus Christ spoke of as thorns, would wound his soul, or that he would be contaminated by contact with worldly goods.

Many who acted as his personal servants or secretaries are still alive today; these men, of the highest integrity, who had personal knowledge of his private life, testify that he preserved his chastity to the very end of his life.