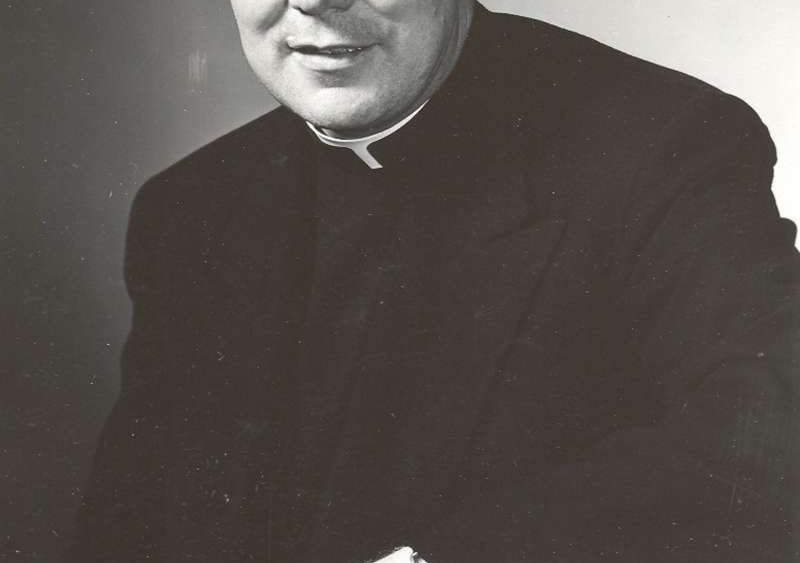 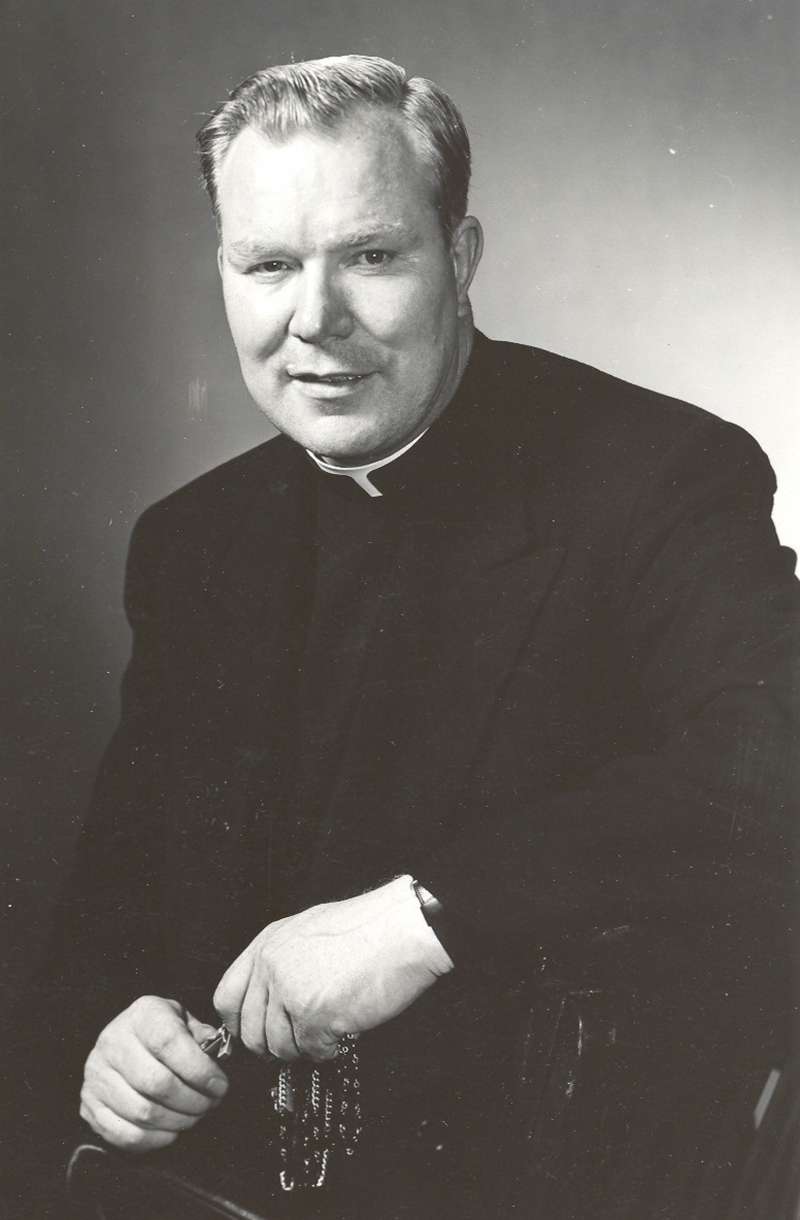 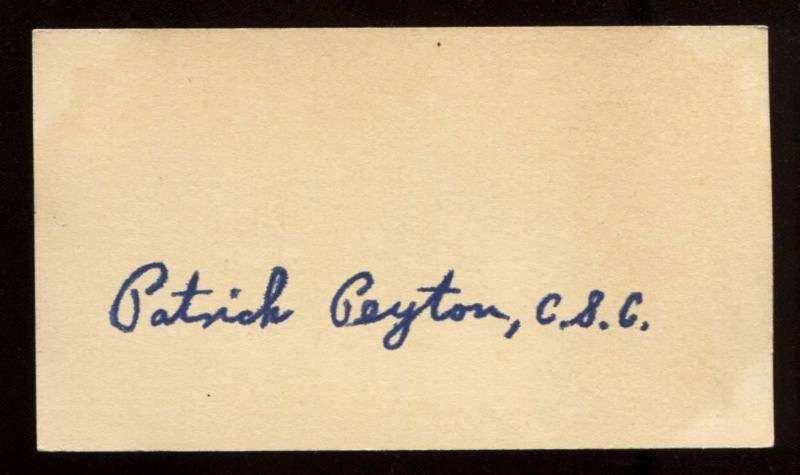 Father Peyton, known worldwide as “The Rosary Priest,” was a Catholic media pioneer in the 1940s, using radio and later television to produce popular programs featuring Hollywood stars and other celebrities to promote family prayer.

His ministry produced more than 600 radio and television programs and 10,000 broadcasts. The priest also conducted rosary crusades for millions of people in dozens of countries. He had two especially famous mottos: “The family that prays together stays together” and “A world at prayer is a world at peace.”

Father Peyton emigrated from Ireland to the United States in 1928 when he was 19, with his heart set on becoming a millionaire after his dream of becoming a priest was thwarted when a seminary turned down his scholarship request.

He found a job as a sexton in the cathedral of Scranton, Pennsylvania, and he and his brother joined the seminary and were ordained in the Congregation of the Holy Cross in 1941.

Father Peyton’s first assignment was as chaplain in Albany, New York, where he launched a project to promote praying the rosary and family life. He had a special devotion to Our Lady of the Rosary after attributing his recovery from tuberculosis to her intercession

Father Peyton died in 1992. After the pope’s decree recognizing his heroic virtues, in general, a miracle is needed for his beatification and a second one for his canonization.

On Monday, December 18, 2017, Pope Francis approved the Decree of the Heroic Virtue of Father Patrick Peyton, C.S.C., thus bestowing on him the title of Venerable. With this declaration by the Holy Father, Fr. Peyton, known worldwide as the “Rosary Priest” for his tireless promotion of the rosary and family prayer, advances one step closer to canonization.

“This is a marvelous Christmas gift which the Church gives to the Congregation of Holy Cross,” said Fr. Robert L. Epping, C.S.C., Superior General. “It illustrates that our vocation can lead to holiness when we answer God’s call wholeheartedly and zealously evangelize the world in union with the Church and under the protection of our patroness, the Blessed Virgin Mary, our Sorrowful Mother.

“We pray in thanksgiving to God for the graces of holiness given to Fr. Peyton through his untiring devotion to the Blessed Mother, the Rosary, and Family Prayer,” continued Fr. Epping. “May his work continue to strengthen family life in the world by the work of the Holy Cross Family Ministries. We thank also the Holy Father, Pope Francis, for the honor of recognition he has given to our brother in Holy Cross.”

The approval of the Decree of the Heroic Virtue comes after a long process that began back in July 1997 when the Congregation of Holy Cross formally petitioned an investigation into the holiness of Fr. Peyton. By June 2001, that petition had been formally accepted, and Fr. Peyton received the title of “Servant of God” and the official investigation of his life, ministry, and writings could commence.

In April 2015, the results of that investigation, condensed into a 1,300 page document known as the Positio, were presented to His Eminence Cardinal Angelo Amato, S.D.B., Prefect of the Congregation for the Causes of Saints. The presentation was made by Fr. Willy Raymond, C.S.C., President of <span “text-underline:none”=””>Holy Cross Family Ministries; Fr. David S. Marcham, Vice Postulator of the Cause; and Dr. Andrea Ambrosi, Postulator of the Cause. They were joined by His Emmence Cardinal Luis Antonio Tagle, Archbishop of Manila, Philippines, an enthusiastic support of Fr. Peyton’s cause.

The Positio was then reviewed and discussed first by a panel of nine theologians and then more recently by a group of 15 Cardinals and Archbishops. Both groups vote affirmatively to recognize Fr. Peyton’s heroic virtues. Based on those recommendations, and after a meeting with Cardinal Amato, Pope Francis authorized the Congregation for the Causes of the Saints to promulgate the decree recognizing the heroic virtues of Fr Peyton.

The declaration of “Venerable” is the last step before beatification, which requires that a miracle attributed to the person’s intercession.

Many favors and miracles attributed to Fr. Peyton’s intercession have been reported, and some of these possible miracles have alraedy gone through the initial study and investigations at the local level. They would need to be studied and reviewed by the Holy See in Rome before Fr. Peyton could be beatified.

Learn about the life of the Rosary Priest

The essence of Fr. Peyton’s ministry, which spanned half a century, began in his family. He was born January 9, 1909, in Carracastle, County Mayo, Ireland. His parents, John and Mary Peyton, gathered their family to pray the Rosary every evening.

After emigrating from Ireland to the United States, Fr. Peyton joined the Congregation of Holy Cross. While in seminary, he became gravely ill as a seminarian and the doctors had no hope of recovery. So he followed his parents’ example and turned to Rosary prayer.

“Father Peyton was a seminarian, studying for the priesthood, when he was stricken with tuberculosis,” said Fr. Raymond. “He prayed his rosary to the Blessed Mother and made a miraculous recovery. From that moment, he knew he was to be the one to carry out her apostolate, her ministry to bring families together for rosary prayer, just as his family had done.”

Fr. Peyton began that his ministry in Albany, N.Y., in the United States, but it quickly started to spread around the globe. He went on to lead millions in prayer at 40 Family Rosary Rallies that drew 28 million people, including 2 million each at events in Sao Paulo, Brazil and Manila, Philippines. Along the way, he became famous for preaching two powerful and memorable messages, “The Family That Prays Together Stays Together” and “A World at Prayer is a World at Peace.”

In addition to the rosary rallies, Fr. Peyton was a Catholic media pioneer. In 1947, he founded Family Theater Productions in Hollywood, California, to harness the power of the media and to enlist the witness of hundreds of star actors and other celebrities in spreading devotion to family prayer and the rosary.

“We honor Father Peyton’s memory by bringing families together to pray, especially the rosary.  We continue to fulfill his vision by sharing his strong belief with families around the world that the family that prays together stays together,” said Fr. Raymond.

Special thanks to Holy Cross Family Ministries for their assistance with this article.