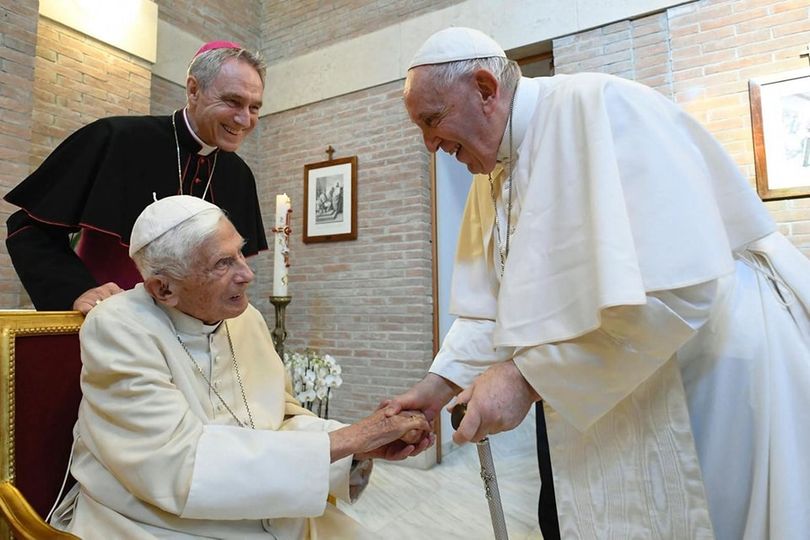 America Magazine: What Happens When a Pope Emeritus Dies?

ROME (AP)—The Vatican has detailed rituals and procedures to follow when a pope dies, but it has not published such rules for a pope emeritus. As a result, official word Wednesday that the health of Pope Emeritus Benedict XVI had worsened prompted questions about what happens if and when he dies.

The answer is: There is no specific answer, at least not one the Vatican has announced ahead of time. The only thing certain is that the most important ritual following the death of a pope—a conclave to elect a new one—does not apply.

Pope Francis sounded the alarm about the 95-year-old Benedict’s health when he asked during his weekly Wednesday general audience for a special prayer for his predecessor, saying the retired pope was “very sick.”

Francis later visited Benedict at his home in Vatican City. the Vatican Gardens. The Vatican spokesman confirmed that Benedict had experienced a worsening in his condition, due to his age, in the previous few hours but said the situation was under control.

Most church watchers assume that, when they become necessary, funeral rituals for Benedict will closely hew to those for a retired bishop of Rome.

Most church watchers assume that, when they become necessary, funeral rituals for Benedict will closely hew to those for a retired bishop of Rome: a funeral in either St. Peter’s Basilica or the piazza, in this case presided over by Francis rather than the dean of the College of Cardinals, and burial in the grotto underneath the basilica.

“The funeral for a pope emeritus is the funeral for the bishop emeritus of Rome,” church historian Alberto Melloni said, adding that the situation isn’t entirely unprecedented since dioceses around the world have resolved how to properly honor retired bishops.

The rites themselves are contained in the Rituale Romanum, which lays out how liturgical rites are to be celebrated, with specific prayers and readings.

Few can forget the long lines of pilgrims who queued up for days and nights to pay homage to St. John Paul II when he died in 2005.

A few tweaks are called for, however: Because Benedict was a head of state, the funeral would presumably take on greater pomp with the attendance of official delegations from around the world. To give them time to arrive, and to honor Benedict’s former status as pope, he would likely lie in state for a period of days in the basilica before the funeral, as occurred for popes past.

Few can forget the long lines of pilgrims who queued up for days and nights to pay homage to St. John Paul II when he died in 2005.

One thing that would distinguish a funeral for Benedict from that of the reigning pope is the nine days of funeral rites before burial, called the “novemdiales,” presumably would not take place, Melloni said. But one tradition that would be retained is the placing on the casket of the book of the Gospels.

When Benedict announced his retirement in 2013, he opened a decade of uncharted pontifical territory. From his title, “pope emeritus,” to his decision to retain the white cassock of the papacy, Benedict largely created a new playbook to encompass both a reigning and a retired pope.

Christopher Bellitto, a history professor at Kean University in New Jersey, said the novelty of Benedict’s remarkable decision would likely carry over into the posthumous period, and beyond.

“Headlines will say ‘One pope is burying another.’ Not true,” Bellitto said in an email. “To be clear: Benedict is the former pope.”

“But it is an extraordinary sight since we haven’t had a papal resignation in 600 years. It speaks both to the continuity of papal tradition in the line of St. Peter but also to a new world where papal resignations will be less rare, maybe even common,” he said.

The Regina Coeli (Queen of Heaven ) in English

O God, who gave joy to the world through the resurrection of Thy Son, our Lord Jesus Christ, grant we beseech Thee, that through the intercession of the Virgin Mary, His Mother, we may obtain the joys of everlasting life. Through the same Christ our Lord.