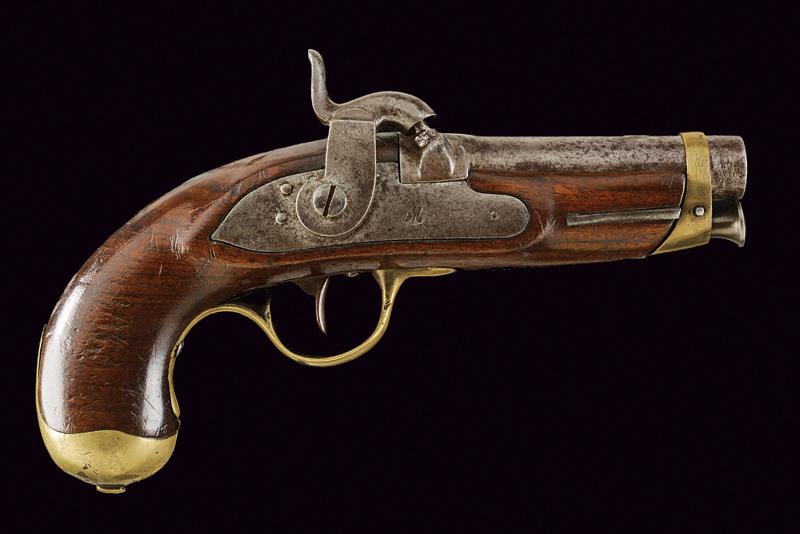 A Percussion Pistol during the Papacy of Pius IX

Information on the Percussion Pistol

The pistol was manufactured by a business called F.lli Mazzochi (which is short for Fratelli Mazzochi, or The Brothers Mazzochi).

Their father, Gaetano Mazzochi, began manufacturing arms in Rome for the Papal States in the early 1800’s.  His business was shut down at some point during an invasion or an insurrection, and his sons resurrected it.  They employed nearly 100 workers up until the last days of the Papal States.

They remained active for at least a few years after 1870.The pistol specifically has the remains of the original GM mark on the lock plate.  It also has the remains of St. Peter’s keys on the top of the barrel, but just ahead of that is an unidentified mark.

The pistol has the Papal armory mark “A” on the left side of the barrel.

This specimen is unique among all of the other examples of Papal percussion pistols in that it does not appear to be a conversion from a flintlock pistol (it was common in the mid 19th century to convert flintlocks to fire with the more reliable percussion caps).

In addition to that, its barrel has been cut down 4-5cm shorter than the other Papal pistols.  The description says “wooden full stock” but usually those pistols have 3/4 stocks.  It may have been cut down by someone in the Gendarmeria who needed a more concealable undercover weapon, or it may have fallen into private hands at some point and it was done for the same reason but by a civilian.  It’s really hard to say.