“Once the idea is introduced that one may take the life of a person because he is not useful to the state, then it will not be long before we are taking his life because his ideas are not the same as those of the state. In 1936 Hitler introduced the idea of merciless killing under the lying title of ‘Charitable Foundation for Institutional Care.’ The basic principal was that those who could not be of benefit to society should be killed. Up to the outbreak of the war 275,000 people were put to death. Once the door was opened for destroying the sanctity of a single personality, there was nothing to stop slaughter.” Archbishop Fulton Sheen (Life is worth Living)

Archbishop Fulton J. Sheen is one of them. 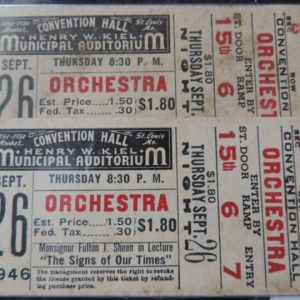 Fulton Sheen always believed the source of his strength were the hours of intimacy he spent with the Lord, an hour daily before the Blessed Sacrament, which he never once missed from the day of his ordination. In 2002, Sheen’s Cause for Canonization as a saint was officially opened. As a result, he is now referred to as a Servant of God.