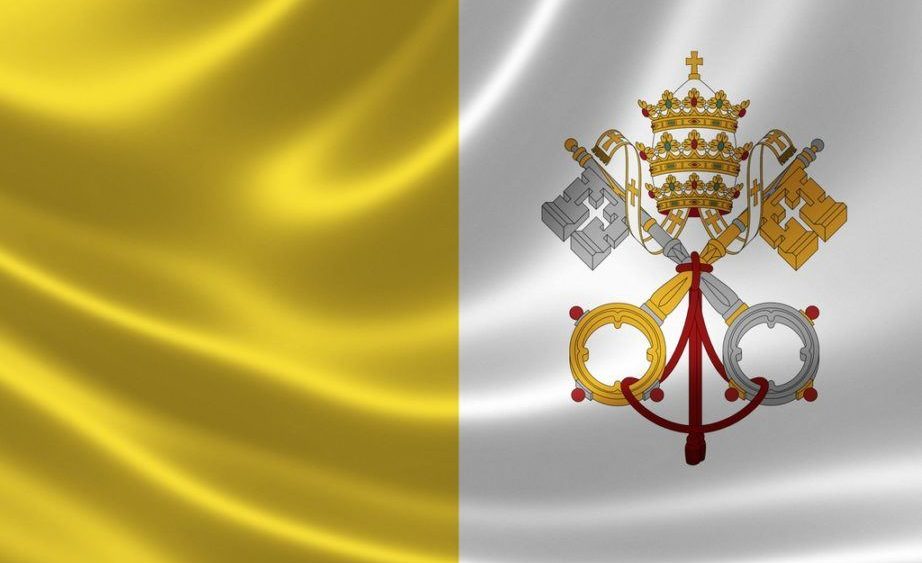 The Vatican is a city state and as such it has national characteristics such as a flag.

The flag consists of two vertical bands: one is gold or yellow and the other one is white. The symbol of the Vatican, the crossed keys of Saint Peter and the Papal Tiara are placed in the center of the white band. The crossed keys are made of one golden and one silver key to the left of the gold one. There is also a red cord which connects the two keys. The two keys are a representation of the keys to Heaven that were given to St. Peter, the first Pope. The golden key represents spiritual power whereas the silver key represents worldly power.

The Vatican City flag is square and together with the flag of Switzerland they are the only square country flags. The flag’s stripes of white are in violation of the heraldic rules of tincture. This is due to the fact that the Vatican follows the rules of God and not man’s.

The flag’s design of the Vatican flag is part of the constitution of Vatican City. It is a ceremonial flag and it is flown during various Roman Catholic religious feast days. When a Pope dies, the Vatican City flag is flown at half mast until the nine day mourning period is over. However the flag is not only used within the territory of Vatican City. This flag is also used by Catholics across the world in catholic establishments such as churches and educational institutions. It has become part of the identity of the Catholic Church.

Further Information about the Cross-Keys & Tiara

The keys refer to the promise of Christ to Peter, “I will entrust to you the keys of the kingdom of heaven. Whatever you declare bound on earth shall be bound in heaven; whatever you declare loosed on earth shall be loosed in heaven.”  They are a symbol of the power the Catholic Church believes that Christ gave to Saint Peter and his successors, with the gold key signifying that the power reaches to heaven and the silver key that it extends to all the faithful on earth, the interlacing indicating the linking between the two aspects of the power, and the handles of the key being at the base to symbolize the power being in the hands of the pope.

While actual wearing of the Papal tiara has been discontinued by  Pope John Paul I and his successors, it remains a papal heraldic symbol. A crown was added to the headgear of the Pope in 1130 to symbolize sovereignty over the Papal States. In 1301, Pope Boniface VIII, at that time in conflict with Philip the Fair of France, added a second crown to indicate that his spiritual authority was superior to any civil power. In 1342, Pope Benedict XII added a third crown to symbolize the superiority of papal religious authority over that of non-religious monarchs. The original significance of the three crowns was lost over time and they came to represent instead the Pope’s powers as priest, ruler and teacher.